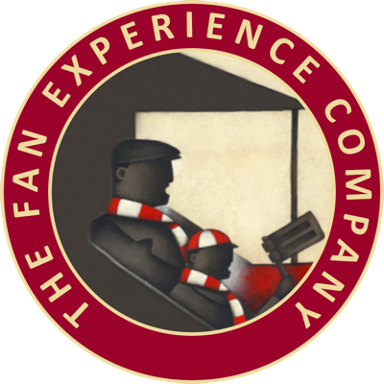 Darren has been a part of The Fan  Experience Company since 2017.

He has a background in working on customer service excellence projects in the UK and Europe, and an MBA that included studying in the USA .

A UEFA Mentor and Fan Experience Company consultant, Darren works with clubs across Europe to improve the match-day experience and increase attendance through engagement with fans.

Wrexham’s co-owner, Ryan Reynolds, wants them to be the first football club in space.

It’s revolutionary, I’ll give him that. And ambitious too – which fans always love – but is it feasible? Especially with the cost of fuel these days. And who would they play when they get there?

To be fair to Reynolds, he was being typically flippant when it came to the space bit, one of his many ‘unrealistic ambitions’ for the club. I just hope that others don’t take him too seriously. Football clubs, and owners, are classic followers by nature, who wait to see what everyone else is doing before taking the plunge.

The reality for many is that there are far more pressing concerns at ground level. Clubs need to walk before they run. And definitely before they attempt to launch into the atmosphere, dock with the international space station or orbit the earth.

As a company whose very existence is based on making life better for fans, we are always fairly staggered at the number of examples where a club seems intent on shooting itself in the foot when it comes to the matchday experience and fans. And what is more incredible is the speed in which they can reload and fire off a second – and even a third – shot.

Of course, no club or person working within it will wake up each morning and say ‘how can I make life difficult for the fans today?’

Take, for instance, buying a ticket. For the vast majority of clubs in the UK, filling more seats has to be key. It should be the easiest, least painful, act ever. Why would we give a fan the slightest excuse not to buy one? Especially with the cost of living crisis making football a luxury not everyone can afford.

Yet we hear and see this a lot. It’s a common criticism of the women’s game – even one that has just seen a massive boom after England won Euro 2022 – but it’s also rife in the men’s game too. Complicated and long-winded processes, poor or no information and counter-intuitive ticketing systems are all part of the problem, but sometimes it’s also as simple as no-one picking up the phone when a potential new fan calls up.

Having been involved in assessing the experience at clubs since 2006 (we’ve completed well over 3,000 by now) we do see positive change too. It’s slow at times but it does take place.

For example, almost all EFL clubs now have a new fan guide or page(s) on their website. It wasn’t always like that, but they have realised that most fans using the website are likely to be doing so because they need information. Existing fans already know where everything is (most of the time) and if they don’t, they’ll have an idea where to look and it’s rarely via the traditional and official routes. New fans don’t know that. This was perfectly highlighted by a club we assessed who used their nickname as the header for their fan guide, despite the majority of new fans not knowing what the club’s nickname was and thus, missing it.

Likewise, whereas fan zones outside a stadium were relatively rare prior to Covid, they are now cropping up everywhere. Soon, a club without a fan zone will have some serious questions to answer from its own fans and those of the visiting team. It’s part the push to expand the experience beyond the game itself. If we want fans to arrive much earlier and spend more time (and money) at our stadiums, they have to have a good reason. If they don’t, they’ll just turn up at ten to three, like they always have. Clubs have to change first if they want their fans to.

Other parts of the experience haven’t seen such a rapid rate of improvement. Merchandise and refreshments can still be very hit and miss. The number of times that food runs out, or long queues mean that fans miss a significant part of the second half, is not insignificant. And even though a club can make by far the biggest difference through their people, many do not invest in them anywhere near as much as they could. Club representatives (be they full time staff, matchday stewards or volunteers) perform at their best when they have proper training, equipment, communication, rewards and recognition. Yet we’ve seen countless examples of people working at a club who have not had any of this, or very little.

Often, the reason is just down to lack of willingness to spend the money. Show a club a shiny new CRM system, the latest in player security or, heaven-forbid, a crypto-currency gimmick, and they might get the cheque book out. Ask them to spend a fraction of that on improving the experience for their fans and it’s often a different story. I imagine that a lot of clubs spend more on coffee and tea bags each season than they do on their fan experience.

We’d argue it’s a false economy. Unfortunately, too many clubs are so pre-occupied with reaching the Premier League – it’s another of Ryan Reynolds objectives for Wrexham – or a division higher than they are in, that they forget about the fans.

If they get there, it can be even worse.  Because most stadiums are sold-out, and ticket revenue is not as important, it’s easy to regard fans as less important. Spending, and thinking, becomes more focussed on the first XI. But if it goes wrong and the dreaded R word happens, the fans are the ones who suffer the most as their beloved club spirals down the league. If they are lucky, it won’t be into a Black Hole but some clubs havegone that way and others have come mighty close.

No one is asking clubs to create a Disney+ experience. Fans would probably find that too much anyway. But there is no excuse for not delivering an event rather than just a game of football. Many of the things we’d expect at Disney are relatable to attending a game (fans want to purchase tickets easily, feel welcome and safe, have access to quality merchandise, have plenty of places to eat and drink and, if they are a family, want their kids to be entertained). It’s not like it’s an alien concept.

On that note, if Wrexham do make it into space, let’s hope they do themselves justice. A team of Klingons or Daleks might be a different proposition to, say, Aldershot or Dorking away on a Tuesday, although I’d fancy them against an Imperial XI – stormtroopers can’t shoot straight to save their lives – although it might go all the way to ET (see what I did there?) and penalties.

Maybe they could pick up of the owners of other clubs while they are there. Some certainly seem to be living on another planet.

And, unfortunately for them, it’s not always Planet Hollywood.

In our new podcast series, we’ll be taking each of the touchpoints on the fan’s journey (and we’ve added a few new ones this season) and dissecting them. That journey, what was once the ‘matchday’ experience, has stretched in its scope to now cover more than a week in time, from the build up to a game to the time afterwards when clubs can ask fans what their experience was like. Incredibly, hardly any do.

Look out for updates in early October.

Want to read more by The Fan Experience Company?

See our White Paper about the balance between safety and the match day experience? 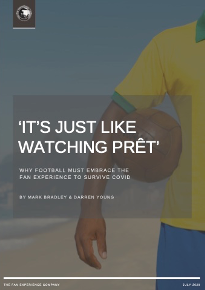